Why Avignon? I had decided to spend the last day of my trip just being a tourist in Avignon for the simple reason that a convenient train connection stopped there, and as a theologian interested in church history, I was curious.

Of course, what appeared to be a convenient train connection turned out to be yet another high-speed train, and after enjoying the slow, scenic train ride from Vallebona to Barcelona together with Patrick, I was seriously annoyed by the airport-like boarding area permitting access only with a valid ticket and reservation. That meant I couldn’t really enjoy lunch with Patrick, because I had to keep watching the time to make sure I said good-bye to him in time to get through the security clearance in time to board the train, because he couldn’t accompany me to the platform to wave good-bye. Saying good-bye to Patrick is always so hard, and I resented having it made even harder. My irritation was further exacerbated when the train was late and all the passengers were left waiting in line with no information or explanation, while the staff assiduously avoided making eye contact with any of the unhappily waiting passengers. Since the train was bound for Marseilles, though, as I was standing in line I was surprised by what a relief it was to hear people around me speaking French and realize I could actually understand them, even communicate with them to some extent as we relayed information to one another about the delay, despite the appalling inadequacy of my French.

Eventually the train arrived, we were all finally permitted to board, and I found my seat without further complications. At first I was disappointed to find myself sitting on the left side of the train, but that turned out not to matter. Somewhere between Girona and Perpignon, the trains seems to fly across a body of water, so the water is seen from both sides of the train. In the evening, as the sun was just setting, the water was so still it perfectly mirrored the clouds and the setting sun. Looking out the window of the train, I was entranced as the world appeared to magically turn itself upside down.

When I arrived some five hours later in Avignon, I was again annoyed to find myself at the TGV train station outside the center, rather than at the main train station, which was within walking distance of my hotel. (Note to self: seriously, avoid high-speed trains in the future.) The hotel itself turned out to be absurdly elegant (and normally about four times more expensive than the rate I was paying), which I found a bit difficult to take seriously after Calafou. I confess, however, I did thoroughly enjoy being able to take a nice, long hot shower without leaving my hotel room.

The Disconcerting World of Avignon

Avignon is obviously accustomed to and prepared for tourists. Although it is famous for its medieval architecture, it was something of a relief to see that Disneyfication has not obviously taken hold of it. And with “Sur le Pont D’Avignon” already playing incessantly in my mind, I was grateful not to hear it played anywhere outside my own head. So what does one do as a tourist for only one day in Avignon?

Following the luxurious breakfast buffet in the hotel (along with the still necessary cough syrup, aspirin and ginger tea), I took a walk right through the middle of town to the famous center. Then of course I bought a combination ticket for the Palais des Papes and the famous bridge, not realizing how overwhelming the Palais des Papes would be. The education staff there has done a fantastic job of preparing accessible information for visitors in an engaging way – and I have worked with enough museum and gallery educators to recognize how much effort and expertise goes into visitor information like that, so I hope the people responsible for it received the moral and financial appreciation they certainly deserve (even though I know that almost never happens). Upon presentation of the admission ticket, each visitor was given an electronic pad on a lanyard along with clear and simple instructions in the appropriate language. All along the tour there were informative, attractively designed panels in multiple languages and benches where visitors could sit down to read these panels. Sensors in each room triggered relevant information on the pad, and in certain spots all along the way, a marked sensor in the room filled the depiction of the room on the pad with myriad ghosts of grim-looking old men in ornate robes to explain the purpose of each room and show how it presumably looked in use. I was impressed by how well the copious information was organized, but between the printed information and the digital information, I had to keep taking a step back to get a sense of where I was, a sense of the atmosphere of the rooms with all their long history. Eventually, however, I began to realize that it wasn’t just the abundance of information or the long walk that felt exhausting. The palace as a whole felt hopelessly oppressive – and yet there was something missing.

Although I consider myself a critical feminist theologian, since I was raised traditionally as a Catholic, the idea of the papacy as an office of spiritual leadership is deeply ingrained. In the Palais des Papes, the Papal Palace in Avignon, however, there was no trace of that. In all that copious information, there was no mention of the significance of the pope for the Catholic Church. Power, wealth, political intrigues, treasures, luxury, worldly preeminence, chapels built for exquisite adornment, not for praying in. And as the pad repeatedly displayed, this was wholly, completely and solely a man’s world. Only one woman was ever mentioned and also depicted in a painting toward the end of the tour: Joanna, countess of Provence, who sold the city of Avignon to Pope Clement VI for 80,000 florins in 1348 to raise money for troops to defend her claim to Naples. In the painting depicting this transaction, Joanna is no Khaleesi with dragons or loyal companions, but is accompanied only by a malevolent-looking imp holding the train of her gown, surrounded by grim-looking men in ornate robes. The painting is a vivid portrayal of the humiliation of a strong woman forced to concede her power to greedy men. The triumph of patriarchy. I found it nauseating. 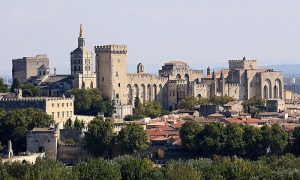 After hours and hours of wandering through the Palais des Papes, when I sat down somewhere outside for a cigarette, it was a relief to see how shabby and ramshackle the narrow little streets around the palace looked: the reverse side of power.

Perhaps my impressions of Avignon might have been different, if I had been feeling better, if I hadn’t still been struggling with low energy and the suspicion that I had been wandering around with a fever all week, or perhaps I might have felt even more angry and rebellious if Avignon had turned out to be a pretty place. As it was, I found the Medieval architecture neither pretty nor romantic, but simply oppressive.

Following the long tour through the Palais des Papes, I wasn’t ready for another walking tour yet, and although there were outdoor cafes everywhere, none of them tempted me to sit down and eat something, so I decided to take the little city tour train that one finds in almost every city now. Unlike most city tour trains, however, this one wasn’t bright yellow. It was gray and looked a bit dilapidated, cobbled together from leftover bits and pieces that no one had bothered to paint. That was fine with me, and I was happy enough to just sit there for an hour on the little train tootling along around the city center. Apart from the main shopping street with the usual international chain stores, there seemed to be only souvenir shops, and I eventually found the endless sacks of lavender and herbs of the Provence so depressing that I finally gave up on the idea of finding presents to take home with me. After the train, I made my way to the famous bridge, where I exchanged my combination ticket for a conventional audio guide. For an audio guide, it worked reasonably well, although I somehow had the impression that its creators had resigned themselves to the expectation that tourists are not really interested in the history of the bridge, but just want to walk out on it to take pictures of one another dancing, so they can post them to Facebook and Instagram. I didn’t feel like dancing.

In the evening there was no room left in the hotel restaurant, so I ended up going to a nearby restaurant for dinner, following a recommendation from one of the young men at the reception. Even in October it was still (just) warm enough to sit outside to enjoy an excellent (albeit rather expensive) meal in a beautiful courtyard. In Vienna it would probably be regarded as “hipster”, but I didn’t really care. Even that seemed to fit with my impressions of Avignon.

I’m not sorry I stopped in Avignon. On the contrary, I think the juxtaposition made me even more appreciative of the first two worlds I visited. Turning history into a tourist attraction will not help us make a good life for everyone in the long term.

Transition IV: From Avignon to Linz by way of Frankfurt

Well supplied with water bottles, snacks, and a bag of disgusting eucalyptus cough drops, following an early breakfast, cough syrup and aspirin at the hotel, I was ready for the thirteen-hour journey home to Linz, including changing trains only once in Frankfurt. From Avignon to Frankfurt, I was happy to be able to just sit quietly and comfortably looking out at the beautiful scenery of Provence on a lovely autumn day. The main train station in Frankfurt is no more interesting than the airport, although a bit smaller and not as glaringly bright, and the journey from Frankfurt to Linz is no more interesting by train than it is by plane. Either way, Frankfurt remains “almost, but not quite home” – journey over in any case, and the last 100 kilometers are always the longest. In the end, I was happy to be home again, where my cats were there to greet me as I can in the door. Over the next few days, the cats also urged me to accept that I was still sick and just stay wrapped in a blanket quietly on the couch or in bed, watching silly films and sleeping, so that they could take long naps on top of me. After the effort of pretending I was ok for a whole week, I was happy to accommodate them. Actually, that was probably just what I needed to make the transition back into my everyday life.