Remembering the long and confusing train journey from Linz to Barcelona in 2014, with many changes and long waiting periods in between, I was most intrigued by the possibility of a more direct connection between Italy and Spain offered by ferries. Although I had reservations about the thought of traversing the mass grave of the Mediterranean Sea in a luxurious ship, I have always loved traveling by ferry and I still miss living close to the sea, so I eventually decided to make use of the further Interrail discount on a ferry ticket and take that option.

Again and again, planning a trip and actually taking a trip can be so different. Connections that look comfortable and convenient turn out to be high-speed trains, which often involve special boarding areas, security checks, additional costs, numerous tunnels, which all make them barely an improvement over flying (memo to self: avoid high-speed trains on future Interrail trips). Then there is the sometimes disconcerting disconnect between online information and real-life circumstances. The lovely little port town of Civitavecchia, for instance, has a wonderful website full of useful and practical information about how to get from the train station to the ferry terminal. The town itself, however, seems to be entirely unaware of its online presence: no signs, no bus, no kiosk, no maps, no information whatsoever. A young couple helped me get my suitcase down the steps at the entrance to the station (only slightly superfluous after I had managed to get it up the steps on the other side by myself, but it was kindly meant), so at least there was someone I could ask about how to get to the port, and they pointed me in the right direction. Still no signs, no bus, no information, no shuttle – just flocks of young teenagers floating around in their pretty bubbles on a warm evening among artfully illuminated ancient buildings. After running around in increasingly desperate circles near the water for some time, I finally managed to hail a grown-up-looking figure not wearing a military uniform, hoping to be able to ask a human for assistance. This human turned out to be a cute guy, who was very charming and friendly and perfectly willing to discuss his ability to speak English at greater length with me, but when he pointed out some blue lights as the dock where the Grimaldi Lines ferry is usually to be found, I was so dismayed by the distance between those blue lights and me that I just grabbed my suitcase and started running again. I think part of the problem may have ultimately been that I was unable to perceive the ferry as such. I had the vague impression of a large building being in my way, preventing me from getting to the ferry, when it was, in fact, my destination. By the time I finally figured that out and got into the terminal just in time to board, I was soaked in sweat from madly running around the docks for over an hour in my overly warm traveling clothes.

Despite its size, the ferry was not a cruise ship, but just a ferry: a large vessel for transporting large vehicles with a few amenities for the drivers of those vehicles. My single cabin with an outside window was a nice retreat, even though the view from the window was almost completely blocked by a large, high-tech lifeboat, and I was happily ready to spend the next twenty hours there. The only problem was that I woke up freezing in the middle of the night, and although I found extra pillows, there were no extra blankets, nothing to help me feel even a little bit warm so that I could sleep. That definitely put a damper on my ferry trip that I had been so looking forward to, but I was still happy to be on the ferry and not busily changing trains somewhere in the south of France.

Nevertheless, the twenty hours passed surprisingly quickly, and the ferry pulled into the harbor of Barcelona just before eight in the evening. Since Patrick has not had a telephone for almost four years, I had sent him a reminder a few days earlier that he needed to be there to pick me up, because I otherwise had no backup plan. And as I came off the ferry, he was standing right there in front of me, before I could even start to look for him. His dog V was with him, of course, and V was so delighted to see me again that I forgot all about feeling cold and just felt loved.

The World of Calafou

Life in Calafou is not easy, in many ways it is actually quite hard, yet to me, Calafou is perhaps the most hopeful place I know. A “post-industrial, post-capitalist colony” set up among the ruins of a factory colony from the nineteenth century, it has an almost post-apocalyptic appearance, but the people who live there have made a space to live and work together from the refuse and rubble, finding new ways to live and work together that are sustainable, autonomous and viable. The intention “is to develop a network based on a network of cooperatives, individual projects and housing in a collectivised area. This seeks to facilitate the sharing of ideas, goods and resources to foster synergies in a natural way. A place for social innovation, technology and policy based on self-responsibility and cooperation. A project where the productive economies are in the service of people allowing their needs for access to resources and tools are not obstacles to the realization of their creative potential.” (Calafou website)

The factory colony around a textile factory built in the nineteenth century was a capitalist invention designed for maximum exploitation: since the factory was in a remote location away from other towns, far removed from urban centers, the people who worked there lived in the workers’ quarters there and spent what little money they earned at the factory shop. There was even a church in the colony, so that people went to the factory to work, but then the factory took over their entire lives. What is left now are ruins, rubble, refuse, and one of the most heavily polluted rivers in Europe. This is what the people who live there now work with to build a new way of living, based not on exploitation, but on self-responsibility and cooperation, a different way of “being-with”. To me, this is what makes Calafou such a hopeful place. I am not optimistic about the future. I believe we are faced now with capitalism beginning to implode, making it all the more urgent for us to be able to imagine alternatives. What can we build from the ruins and the rubble? How can we find new ways of doing it together? Calafou gives me hope that we can. 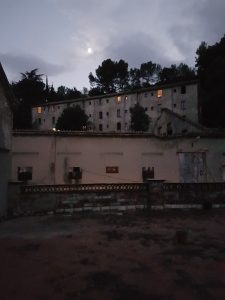 This is one of Patrick’s favorite spots.

I cannot imagine a better place for Patrick to have ended up in. Although my Spanish is extremely limited and I don’t understand Catalan at all, I can still read body language, and I loved hearing the way people say his name there. He lives among good people. He still has a lot of work to do on his little flat in the former workers’ quarters, but it feels just right. Lionie is happily enthroned on top of the bookshelves, and everywhere there are reassuringly familiar objects: dishes from Oma, my old pots and pans from Innsbruck, pictures, books, the tables he made originally for his van. Patrick again has a home now. And he is learning so much! That doesn’t mean his travels have ended. He is making plans for further journeys, and he still gets by as a street musician during tourist season all around southern France, Spain and Portugal. When he sets off now, though, he is not just setting off into the unknown with no plan or destination. Now he has a place to return to.

After feeling so cold for twenty hours on the ferry and driving from the port back to Calafou in a horrendous storm that washed out the street into the colony, I was feeling ill and quite miserable the first day, so I sadly missed watching Patrick take his turn at bar duty the first evening. After that, though, I decided that my visit was too short to waste it lying around in bed feeling miserable. Since I was self-employed for twenty-four years, I have more than enough experience doing the “I don’t have time to be sick now” thing, so that’s what I did. With some rather dubious cough syrup that someone found, lots of aspirin and copious amounts of ginger and lemon tea (I detest the taste of ginger, but I was that determined), I managed to largely suppress being ill, so that I didn’t have to miss out on wonderful evening-long conversations with Patrick and his inspiring neighbors (accompanied, of course, by plenty of wine and cigarettes) or forays into the surrounding area with Patrick and V. It was a bit strenuous, but absolutely worth the effort.

The story continues with Part III