Trying to figure it out

Depending on the choice of milestones, I entered a new phase of life in March, in April, in May or in June. In other words, this has been an ongoing process, and now at the end of July I am still trying to figure it out.

The first milestone was my sixtieth birthday in March, which I wasn’t particularly interested in celebrating, because I was still desperately trying to finish work and I couldn’t possibly afford more than an extra glass of wine at that point. Nevertheless, I quickly realized that being a woman over sixty is actually a lot more fun than any other age I have experienced yet. I feel as though I have joined a secret club with the motto “I have no fucks left to give”. I don’t have to prove anything, I don’t have to please anyone, I don’t have to make any choices that will affect my whole life. I have already made all those choices. I find being a woman over sixty surprisingly liberating, although I am well aware that I clearly speak from a position of privilege. Recognizing that I have a very good life, though, I want everyone else to have a good life too, so my next goal is to find meaningful ways of contributing to making that happen.

Following my sixtieth birthday in March, the social security agency officially recognized me as a pensioner on April 1st and granted my claim to an “old-age” pension of my own (“Alterspension”: it’s actually officially called an “old-age pension”), not just the widow’s pension I have been receiving since Peter’s death. Now I have the card and all. But in April I still wasn’t finished working yet.

I had already turned in the forms to cancel my business license after April 30th, but until then I kept working and managed to finally finish the last of the translations for a book I’ve been working on since last summer (although I still owe them the final revisions), and I translated the Crossing Europe Film Festival Linz for the fifteenth and last time. In 2004, after the last opera production in Wilhering, Crossing Europe became our “family project”. While I took care of translations, Peter took responsibility for system administration, and the boys just did whatever was needed from them. When I checked the first festival catalogue from 2004, I even found the name Christopher Derieg Hütmannsberger on the long list of people thanked for their support, although no one has any idea now what Christopher might have done at the age of 13 to earn being credited in the catalogue. We joined the Crossing Europe family and Crossing Europe joined our family. Even when I had to continue our family project without Peter, I didn’t have to do it alone. With all of that, translating Crossing Europe for the last time as my last ever translation job turned out to be a bit more emotional than I had expected: step (for the last time) by step (for the last time) by step (for the last time) until I wrote the last bill (for the last time) the day my business license came to an end. Finished. For the first time in twenty-four years.

First there were bills to pay, taxes and social security for the first quarter of the year (for the last time), things that needed cleaning and sorting that I had had to just ignore throughout April, regular payments to be transferred from my business account to my private account. There was the wonderful “Art Meets Radical Openness” festival, helping celebrate Christopher’s twenty-eighth birthday in Vienna with wonderful readings and concerts he helped organize – the first month of “freedom” flew by so fast I could hardly keep up.

Then June came. After submitting the application for retirement in September 2017, I started making a long mental list of all the things I would enjoy finally being able to do once I finally retired: cleaning up all the computers and installing a different version of Linux on each one, learning about non-commercial alternatives on the Internet, working on websites, deep-cleaning and renovating the flat, sewing, writing, answering emails, writing, reading, reading, reading … None of those things really happened in June, except that I finally signed up for Mastodon (anyone on Mastodon, please find me @aderieg@post.lurk.org) and worked my way through the first 200 pages of my new 1500-page Linux manual (I think I’ve finally grasped efi, but I still need to work on partitioning). What I did achieve, however, is that I finally paid off the last of my debts to the bank left over from trying to keep the Workshop going for three years. “Debt-free” is a very special kind of freedom, for which I am now deeply grateful.

What also happened in June is that I “officially” handed my work as a translator over to Christopher and my colleague Laura Freeburn from the US. I needed to do that, because obviously I am still a feminist theologian at heart, so I needed a ritual with symbolic actions and witnesses. Although it became apparent that I hadn’t done a very good job of “delegating” various tasks, I was happy with the way everything turned out in the end, especially thanks to Susanne Blaimschein, Erwin Franz and Rebekka Hochreiter (better known to my international family simply as Becky). For the “handover” I spent an entire weekend gathering together and sorting through all the books and artifacts documenting my twenty-four years of work as a translator.

The material remains of 24 years of translation work, moved from the shelves to the floor.

These were then all transported to Kunstraum Goethestrasse, where Becky arranged them beautifully on tables (when Christopher saw them, he blinked and announced sarcastically, “No, that isn’t even slightly intimidating!”), in between hanging up postcards from “my” authors and other cards, invitations and announcements I used to have on the doors of my office.

And then on Friday, 22 June, people actually came to celebrate with us! I presented Laura and Christopher each with a mug filled with teas and chocolates and good luck charms – and a USB stick loaded with pdf files, e-books and links, which I had collected over the years in search of quotations in English. I gave Laura a catalogue including the first text I ever translated for Stella Rollig, and then Laura gave me a copy of Emily Wilson’s new translation of The Odyssey (Emily Wilson is meanwhile a more recent addition to my personal list of Most Admired Women). Then I wanted to give Christopher a different book with my wishes for him, but when I saw the tears in his eyes I almost forgot what I wanted to say, so now I have no idea whether any kind of intelligible message ended up accompanying the book. We finished with a toast: “To the many words, to the other words, to all the words.” 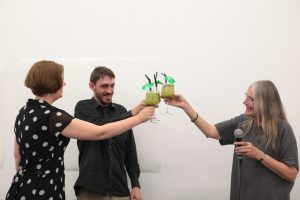 To the many words, to the other words – to all the words.

My one special wish for that evening was for both of my sons to play a small concert for me, and after they granted that wish, I was finished: after that nobody wanted to talk about anything other than how amazingly talented my sons are. I had the impression that Christopher seemed to be relieved to be back on more familiar territory, on stage, holding his own mic and performing his own work. I was surprised and touched, though, when Patrick started his set by pointing out that while Christopher is taking over my work as a translator, Patrick is taking up a different strand from my life with his wandering. I am still grateful to him for pointing out that while translating was my job for twenty-four years, it was never my whole life.

So where am I now at the end of July? In between sorting books back into the shelves, long conversations with Patrick, occasional long walks with his dog, closing my business account, paying the last of my taxes, Death Cafes in May, June and July, still working in between on the last revisions of the last texts of the last book, watching Patrick set off on his way back to Calafou with three humans, two dogs and a lot of luggage in a small Hungarian car, washing sheets and towels (apart from brief intermezzos I have had a full house with a steady stream of visitors since Crossing Europe), just basic cleaning, responding to Christopher’s requests for help or advice, sorting through fabrics and patterns … I haven’t really even started yet with my to-do list for retirement. What is fundamentally different now, though, is that nothing is urgent. There is nothing I have to do right now or have finished by tomorrow morning at the latest. It will probably still take some time to grasp this new rhythm of life, but that’s okay.

2 Antworten zu Trying to figure it out