It seems I have now reached that stage in life, where having both my sons here at the same time has become such a rare and important event that it supersedes all other claims to my attention. “Home for Christmas”: yes, we have become that trite and clichéd, and I won’t even try to deny it or attempt to frame it differently.

Patrick arrived from Catalonia by way of France somewhat earlier than I expected him, before I could even go completely to pieces worrying about him driving in winter (although I felt compelled to remind him to be careful because Germans don’t know how to deal with snow on the roads). As in August, he arrived with his traveling companion V (or Vie in French or Wie in German), the most adorable dog in the world. I was delighted to see them both, although my cats were considerably less pleased about welcoming another companion species into our lives and living space. Then Christopher arrived from Vienna on Thursday before Christmas, so that we could drive out to the Megaplex at the edge of the city to see the new Star Wars film together, following what has meanwhile become another family tradition.

On Friday Christopher thoughtfully offered to help me with the weekly shopping, since I would need to buy more for the holidays and would probably need help carrying it (especially the extra beer). The supermarket was a complete madhouse, of course, just before the holidays and with the prospect of no one being able to do any shopping for three whole days, since the twenty-fourth was a Sunday this year, but that was to be expected. Somewhere in the midst of the mayhem, somewhere in the middle of the juice and soft drinks section, it became clear that Christopher’s offer to help me only extended to helping me carry things home, not to helping me figure out what to buy. While I was trapped with the shopping cart at one end of the aisle and Christopher was on the other side of a large crate blocking the way, I tried to persuade him to pick out some kind of fruit juice, but Christopher, with an expression of alarm on his face, resolutely and verbosely denied any and all knowledge of the concept of fruit juice and especially of responsibility for fruit juice. As we debated fruit juice, decision-making and the nature of “help” from opposite sides of a large crate, out of the corner of my eye I noticed that the young man attempting to re-stock the shelves from this crate seemed increasingly amused. His amusement then spread to other people trapped between crates and shopping carts in and around the same aisle. I suppose being able to provide a little entertainment in the midst of manic holiday shopping is not a bad thing.

After Christopher and I returned from shopping and began to recover, he continued in Very Helpful mode and announced that he would cook lunch for all of us (“lunch” being a rather nebulous term at three in the afternoon). It really was a very sweet offer that I was happy to accept, even though it soon necessitated a major revision of my plans for the day, because as soon as he stepped into the kitchen, he started channeling his father. Just like Peter, Christopher in the kitchen enters into his own idiosyncratic bubble that follows its own laws of space and time that are clearly unrelated to any other laws of space and time. Negotiation is out of the question.

Between Christopher channeling Peter in the kitchen, Patrick perpetually busy doing something or other requiring his full mental attention and frequent mumbling, dog and cats negotiating barely tolerable interspecies coexistence, and me with intended Christmas preparations that seemed incomprehensible or at least irrelevant to anyone else – we were right back in our old life together. It felt so familiar that I wasn’t even conscious of it, until we got to the cemetery on Christmas Eve in the late afternoon. It was almost jarring to look up and see Peter’s name on the marble plaque, and I realized then that I had had the feeling for days that he was just in the other room, just as he had always been when Christmas preparations disrupted his normal routine. Peter has been dead for six years now, but with the boys at home, it almost felt as though I had forgotten. But he is not just in the other room, staying out of the way: he is, in fact, dead.

That hit me again on Christmas morning, when I got up to make coffee and found the stockings filled and beautifully arranged with a few little presents around the tree. It was so lovely and so unexpected that I just stood there and started to cry. And with the tears, memories came rushing in of what Christmas used to be like at our house in years past, when Peter was still alive and we could afford to surprise one another with generous presents. Although Peter always had difficulty coping with anything that disrupted his normal routine, he was a most generous and magnificent gift-giver. And when we were two parents, we shared the pleasure (and the organizational responsibility and the costs) of choosing presents for our children, for the whole family. Wrapping presents was mostly my responsibility, while Peter’s gift-wrapping attempts were mostly hilarious. Now it almost seems funny to remember how we thought we were being so restrained and anti-materialist about gift-giving, valuing the thought over the price of each gift. We could afford to think that way when Peter was still alive.

By myself now, I have a very strict list for Christmas. For our Austrian Christmas with Peter’s family on Christmas Eve, I pick out one book for each person – and thinking intently about each person to pick out exactly the right book gives me great pleasure – and on Christmas day we only do stockings, which are filled with chocolates, a package of cigarettes, a miniature bottle of alcohol, a lottery scratch card and more chocolates. That’s it. That’s all I can afford and all I can organize by myself. Since the most important part of Christmas now is the annual gathering of friends, I’m happy with my new traditions. This is my life now, and it is a good life.

Christmas at our house was different when Peter was alive, and becoming conscious of that difference can sting sometimes. But that was then, this is Christmas now.

And although I’m not sure how I became that kind of mother (or even how I quite feel about it), having my sons home for Christmas is now the very best present possible and all that I could wish for. 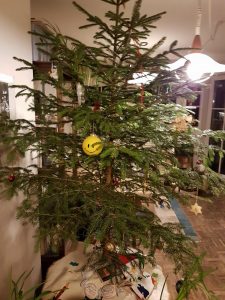 This year Amy keeps an eye on what’s going on in the kitchen.

(That’s me channeling my sister.)