I hate it when my role models die.

When I heard the news that Herlinde Pissarek-Huddelist died, I packed up my children, took them to the playground, and then completely ignored them as I sat on a bench on the side, smoking one cigarette after another as memories welled up. I was lucky the boys were past needing constant supervision by then.

When Johanna Dohnal died, I stopped working and decided to clean the kitchen to keep moving in the face of a huge wave of memories. I was so far away in my mind that I didn’t immediately notice when I caught a loose piece of wicker from a basket under my fingernail, but eventually the whole fingernail had to be removed to get it out, and then the wound got infected on top of that. Attempting to write at least a few lines to add to the tributes to Johanna Dohnal thus became quite laborious and physically painful.

When Natalie Magnan died, I started pacing frantically back and forth from one end of the flat to the other, but all I really wanted to do was curl up on the floor and howl like a frustrated toddler: “Noooooo! I still neeeeeed her!!” I was so distraught by the realization that Nat and I would never laugh together again, I didn’t even know what to add to the tributes and memories that started cropping up all over the Internet.

After Sara and Jim called to let me know that June Lawlor had died, memories of June starting flowing: trips to England with Peter, visits at Forge House, the whole Lawlor family taking us in and giving us a chance to rest and heal when we needed it most … 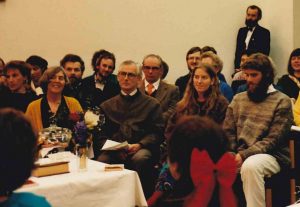 Although my brother had told me about June and Michael Lawlor before, the first time I met them was when they generously came to our wedding on 31 December 1986 to stand in for my parents, who couldn’t make it to Austria.

This time, though, instead of just disappearing into my memories (and risking physical injury by becoming detached from my material surroundings), I decided to go to Kemble for the memorial. It turned out to be exactly the right decision, but also in ways I had not expected.

After telling any number of people in Linz enthusiastically about June, to explain why I needed to go to England for the memorial of my brother’s mother-in-law, as I was preparing to travel I realized I had not been back to Kemble since before Peter died, and we always drove (and argued all the way). In the end, I managed to make sane and sensible travel arrangements for myself alone, despite the vagaries of British public transportation, but I was annoyed that I found myself missing arguing with Peter again. Missing arguments with Peter is still one of the most disconcerting experiences of being a widow, I find. But I got there, Jim met me at the train station in Kemble, and we walked together from there to Tralee, June’s house, where I was generously given June’s room to stay in for the weekend.

Although I knew that June had eventually sold Forge House some time after Michael died and moved to a different house, Tralee surprised me. June’s presence was still strong and comforting in the house, but all the different pictures and reminders of Michael in different places reminded me of how long June had lived as a widow too. Little notes posted in strategic places were a poignant indication of the experience of dementia in the end, but one of them, a note from June’s brother Wilf, struck me most powerfully: Wilf had written about how June had managed to bring the spirit of Forge House to Tralee to create another very special place. The note was hung up in the kitchen, as though June needed reminding of that herself at the end of her life, especially as it was placed in close proximity with her name and date and place of birth.

Yet for me, these were important reminders too: everything I have been struggling with over the past five years, June had already coped with – in her own wise and witty and loving way. The whole time I stayed at Tralee, it was as though I could feel June’s spirit enveloping me with reassurance and encouragement. Every morning when I woke up, the first thing I saw was a mosaic she had made. A round mosaic hanging on the wall, it was filled with all different shades of red, all the different symbolic significances of red, with a golden spiral winding through it, but the spiral was not smooth or even or symmetrical. This crooked, uneven spiral is a widow’s path; it is the path of a wise, strong woman, whose life did not end when her partner died. Tracing this spiral every morning with my eyes, it felt like June reminding me, “Yes, it’s hard. Go on. Yes, it hurts. Keep going.” When I got out of bed and turned around, the pictures of Michael that June had hung on the wall of her bedroom reminded me yet again, “Yes, it’s hard. Go on. Yes, it hurts. Keep going.”

Three strangers staying the weekend at Tralee quickly formed a small, temporary community as we shared our stories, exchanged memories of June and her family, and found our way into taking over small responsibilities for preparing the house and garden for some eighty visitors who came to the memorial on Saturday to celebrate June’s life. Listening to all the ways June had touched people throughout her life was inspiring, motivating – and exactly what I needed at this point.

This past half year, it feels as though I have been struggling to resist feeling overwhelmed by a sense of loss. The Workshop is gone, and now I’m just working to pay taxes retrospectively for the extra money I had to earn to keep it going in the end. I’m tired of translating, I’m tired of working with English, I don’t feel I’m doing a good job, and working only to pay taxes for something that’s gone just feels defeating. The greatest turmoil after Peter’s death has calmed now, and no one I am responsible for is currently in an emotional crisis. No Workshop, no one to take care of – what am I doing? What do I even have left to offer? What can I possibly contribute to making the world at least a little bit better, at least in the little world I live in?

It surprised me how much less useless I felt at Tralee, but I came home feeling inspired, motivated, strengthened. For that, I am so deeply grateful.

“She whom we love and lose is no longer where she was before.
She is now wherever we are.”