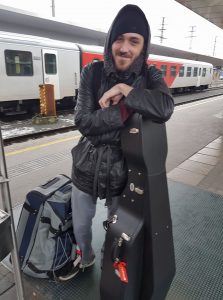 Yesterday Christopher flew to New York with Peter’s last instrument. Everything went smoothly, and both Christopher and the instrument arrived without mishap or complications. The instrument is now in good hands, and it will be played, heard, appreciated as it should be, and Christopher is set to enjoy a few days in New York and then a few days in Michigan with his cousin and my sister’s adorable little granddaughters, celebrating Amelia’s first birthday only a week late, just a year after I was there to welcome her into the world.

So theoretically it’s time for me to breathe now, unwind, pick up the pieces and put myself back together. What hit me? I think perhaps I just wasn’t prepared for all the memories and associations and emotions that getting the instrument to New York triggered for me, and I ended up feeling more than a little overwhelmed.

As Christopher and I walked calmly to the tram stop yesterday morning to get to the train that would take him to the airport in Vienna, in my mind’s eye I kept seeing Peter dashing madly down exactly that same street with a large viola da gamba in one hand, a large suitcase in the other, just barely in time to jump on the tram, but without time to buy a ticket first, so all the way to the train station, he was prepared to explain to a ticket controller that he would be happy to jump off and buy a ticket, if only someone would hold the gamba and the suitcase and keep the door open for him … Peter had to be on exactly that tram in order to just barely catch the last train that would get him to Vienna in time to just barely catch his flight to Australia. It was so quintessentially Peter to cut it that close. As much as Christopher physically resembles Peter, I was very grateful yesterday that he is different enough in character to insist on leaving the house in good time to easily get him to the train station with enough time to enjoy a cigarette before the train arrived that would easily get him to the airport with plenty of time to check in and go through security and probably enjoy another cigarette somewhere in between.

Walking down the street with Christopher and the instrument, my mind was flooded by memories of traveling with Peter, two small children and at least one, if not two large instruments. Between my need for extra time to get my bearings and Peter’s phobia about ever having to wait, traveling together was never anything but extremely stressful. In all the years of our life together, I don’t think we ever got to an airport without both of us being absolutely livid and barely on speaking terms. I don’t think we ever reached a ferry on time. We argued about packing, we argued about arrangements, we argued about how much time we needed to get from point A to point B, we argued about Belgium: as many times as Peter drove from Linz to the UK, he seemed to forget every single time that once you drive all the way through Germany, you still have to cross all the way through Belgium to get to the ferry, and although Belgium is a small country, it’s not that small. I remember Peter shouting out the car window, “What is the point of Belgium?!” and me seething in the passenger seat, “I told you we should have left earlier!” We argued about tractors: Peter invariably insisted that unless there was a tractor on the road, we would easily get to the airport on time, and I invariably insisted that there was always a tractor on that road to the airport. He was incapable of quietly standing in line and patiently waiting for further information. He always had to try something else and I always had to question his sanity. In all those years of mad traveling escapades, I would never, ever have even dreamed how much I would some day miss that, all of it.

Traveling without Peter is certainly much more calm and sane, but I miss the adventures, I miss the surprises. I miss the unexpected arrangements Peter was able to make, which really shouldn’t even have been possible and were probably against regulations – some regulations somewhere, as the statement “I’m sorry, sir, but that’s against regulations” seemed to become almost a familiar greeting, whenever Peter was in the US. Life with Peter was not always easy, but it was never boring. I can cope on my own now, of course I can. It’s just not as much fun.

And somehow I missed mentally preparing myself for what this instrument – “La Ultima”, as a friend called it – would mean to me, how many memories and emotions it would evoke.

This was the last instrument Peter was working on when he died, a Stainer gamba, but it wasn’t quite finished. Thanks to an introduction from Bernhard Costa, Claudia Unterkofler came to Linz, collected all the work Peter had done on the instrument along with his plans and notes on Jakob Stainer, and finished it. I was grateful to be able to pass on Peter’s work on Jakob Stainer to a talented young woman, who had already been in correspondence with Peter about his work on Stainer, so that she can continue it with her own work.

When I heard the instrument played for the first time, it felt like hearing a farewell from Peter at last. The last conversation that Peter and I had was about his mother, how worried he was because she was so ill and in the hospital, and I promised him then that I would look after his mother until he returned. Peter never had a chance to say good-bye to me until Claudia finished the instrument and it was played for me, but I heard him then.

Hearing the instrument played the afternoon before Christopher took it to New York reminded me at the same time of another instrument, though, a very special gamba that Peter made in 1988. When I was pregnant for the second time, when we were reassured that it was not another ectopic pregnancy and everything was fine, Peter and I were overjoyed. We were certain that by Fall we would have a beautiful baby daughter, and we already knew her name. In this feeling of euphoria, Peter wrote her name on the inside of the instrument before he put the top on it and dedicated it to her. Then, just at the end of the first trimester when everything seemed fine, one day her tiny heart just stopped beating and the pregnancy quietly ended in emptiness. After the nearly fatal ruptured tubal pregnancy the year before, Peter had been too busy keeping me alive to be able to mourn the loss of the baby we had hoped for, but his sense of loss was that much greater this second time. I remember watching helplessly as he worked obsessively on that instrument, pouring all his grief into it and his fear that we might never be able to have children of our own. I remember hearing the instrument being played for the first time, around the time the baby would have been born, and as the tears streamed down my face I thought that even though our baby didn’t live long enough to be born, she still has a voice, an incredibly beautiful voice that will live on.

At some point – last year, the year before? – Patrick remarked that there is another symmetry in our family now: Peter is with our daughters, and our sons are with me. I don’t know where our daughter’s gamba is now, since Peter and the musician who had it came into conflict years ago, but now I like to imagine it might show up again someday and end up being played together with Peter’s farewell gamba. It’s a lovely fantasy at least.

After he arrived in New York, Christopher wrote to me that everything went remarkably well on the journey. Far from being a burden, the instrument seemed to make everything easier, as people were especially nice to him, let him board the plane early, made an effort to accommodate him with the instrument. I suggested he should thank his father for that. Getting the instrument ready to travel, I thought several times that it’s a good thing I don’t allow ghosts in my house (as I sternly informed my mother in a dream some time ago, when I ordered her to get out), or Peter would have been driving us all mad. I had the feeling he wanted to keep tweaking the instrument, polish the varnish here, turn the peg there, check the soundpost again … Would he have been satisfied with the instrument? Certainly not: Peter was never satisfied with his own work. Of course he wasn’t – nobody gets to be really good at what they do by just being satisfied, and Peter was certainly very good, even though he couldn’t allow himself to think so.

That leaves me feeling highly conflicted, though. Have I done everything I possibly could to ensure that this last instrument proves to be a credit to Peter’s legacy? I’m not an instrument maker, not even a musician, which means that my possibilities for intervention are severely limited. I have had to depend on other people, knowing all the while how much Peter, being the control freak that he was, would have hated that. But the hard part about being dead is that you can no longer change anything in your life, you have to let other people do it for you. 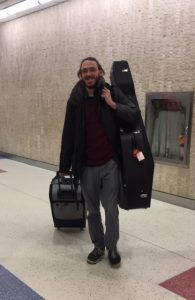 Christopher arriving in New York wearing his very own smile.

I am reminded of a very moving statement by a young woman at a Death Cafe in Linz some months ago. She described her conflicted relationship with her father, but said she often talks to him since he died, and then she smiled and said, “He has learned a lot since he died.” Peter did not finish his last instrument himself, and having to take over the responsibility for it has always made me feel terribly insecure, worried that he would not be happy with my choices, with the results, and watching Christopher leave with the instrument seriously exacerbated my insecurity. So I hope that Peter has also learned something since he died and that I have as well. This is about letting go. The rest is not up to him or to me.