At a wonderful party out by the harbor in August, I was very pleased to run into Peter’s youngest godchild, who was there with his parents, having just returned from their summer holidays. I was quite startled, however, to see how tall he is now, nearly as tall as his mother. It seems only a moment ago that Peter and I met him for the first time. And in that brief moment, I see him again as a newborn in Peter’s arms, as an excited toddler during a trip to the mountains, where Peter taught him to say “moo” to distinguish cows from dogs and to toss pebbles into the water (or Peter’s glass of beer), as a three-year-old sitting on his father’s shoulders and reaching down to help his father hold the urn with Peter’s ashes in it, as a four-year-old having a “man-to-man” talk with Christopher in the garden, as Christopher and I sought to fill the emptiness of the pain of loss with love for a small person …

Clocks display numbers marking the passing of time, the hours, the minutes, the seconds, the arbitrariness of which is most evident this time of year, when we have to change all the clocks, and various clocks confusingly display different times for a while. Calendars display numbers marking the passing of days, weeks, months, years, but they cannot capture the moments marked by emotions. There is a more concrete, more palpable, more emotionally appropriate measure, though: How tall Oscar is, is how long Amy has been dead. 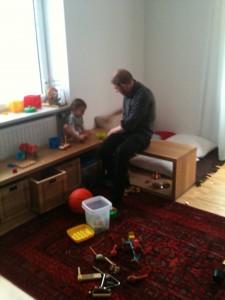 A week or so later, I was pleased to see Oscar again, when he spotted me standing near the bar outside at Solaris one evening and told his father he wanted to say hello. I feel pleased and deeply touched that he seems to feel connected to me, even though he doesn’t remember why. I asked him, but he doesn’t remember promising me five years ago that he would always tell me what is really important. Nevertheless, he has always kept that promise. For three short, long years he was such an important person in Peter’s life, and it was a joy to see them together. I think – or perhaps simply hope or just imagine – that feeling is what keeps us connected, but I am grateful in any case that the connection exists.

Time passes, children grow. My little neighbor from upstairs comes down to visit me. Only a moment ago, her mother was worried that she wasn’t walking yet around the time of her first birthday, but now she walks down the stairs by herself, holding her soft stuffed rabbit in one hand, a wind-up mouse to entertain my cats in the other. She is a few months older than my sister’s first granddaughter, so she is already three. She goes to kindergarten, where they have been making lanterns for the lantern procession on St. Martin’s Day, and she can sing the lantern song beautifully. And she has so much to tell me, I can hardly keep up! But as I listen and we pet the cat together, I feel the moments slipping away too quickly, far away in Michigan, where Amy’s meanwhile two granddaughters are growing up with the understanding that “visiting Grandma” means taking a trip to the lake, where grown-ups then stand oddly sad and silent for a moment. Only a moment. 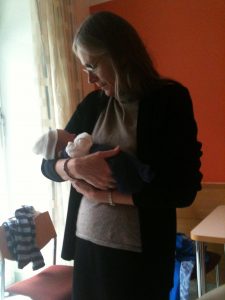 In less than two weeks it will be five years since Peter died. Two months after that, George will celebrate his fifth birthday. George, my first “borrowed grandchild”: How tall George is, is how long Peter has been dead. Frantically, I try to remember when I last saw George, and I worry he will forget me, if I can’t get myself organized enough to spend time with him at least once a month.

I have no sense now of how long or short a time five years might be. I cannot account for the moments that have passed since the policeman came to my door. Sometimes it feels a lifetime ago, sometimes it feels like barely an hour has passed. Were it not for George growing, I would have no measure for how long I have lived as a widow. Perhaps it doesn’t really matter though.