In February I had the great privilege of being able to spend two weeks in Michigan to help welcome my sister’s second grandchild and spend time with her first grandchild, who is now – delightfully, inimitably – two years old. When my godson and my goddaughter-in-law came home with the new baby, two-year-old Evelyn quickly picked up her parents’ conversations and began insisting, “Gotta get back to normal!” Joseph pointed out to her that it is a “new normal” now and asked her what that looked like. “Purple!” declared Evelyn with perfect conviction.

Purple Normal – that sounds like a worthwhile goal to me too.

So this is me now, looking for my own Purple Normal. It wasn’t here yet, when I first got home. Apart from struggling with jet-lag after a seriously awful flight home, I had too much work waiting for me, which I had frivolously announced I would be happy to take on immediately upon my return. And I was faced with having to say good-bye to Paddy again.

After walking (yes, literally walking) from Vienna to Nancy in France last year, Paddy returned unexpectedly in the fall to take a break from his travels, recover physically and try to process all his experiences. Unfortunately – or fortunately, depending on how you look at it – he arrived just as I had made the hard decision to give up my office and the Workshop. It was extremely fortunate for me, because I can’t even imagine how I would have coped with everything by myself, as Paddy ended up endlessly fixing and carrying and sorting and driving around to pick things up and drop things off. Yet it was also deeply unfortunate for him, because the Workshop, the way I had been running it for three years, was exactly the space he needed at that point, and not being able to give him that space – actually taking it away from him – felt very painful, selfish, uncaring. As supportive as Christopher and Paddy both were, I was repeatedly haunted by the feeling that in giving up the Workshop, I was forcing them to say good-bye to their father again. In the end, the last ever production in the Workshop was most fittingly a recording Paddy made there of himself singing Dick Gaughan’s “A Father’s Song”, which he had learned from his father. After I handed over the keys and we left the Workshop forever, he put it online:

To prevent the kind of cross-platform tracking now thankfully prohibited by the General Data Protection Regulation (GDPR), the embedded video has been removed. Please find Patrick Derieg on YouTube and listen to his cover version of „A Father’s Song“ by Dick Gaughan.

After I moved my desk, my shelves, my lamp into my new office in what used to be the boys’ room, Paddy camped out part of the time on a mattress on the floor where my beautiful office used to be. On top of barely being able to find a place to sleep after a hard day of work sometimes, he was hit hard by all the organizational chaos and emotional turmoil that the decision to give up the Workshop ended up entailing. He also got stuck with the cellar. One thing I completely failed to take into consideration was the necessity of extensively reorganizing of my household in order to somehow accommodate and integrate all the material and emotional remains of 30 years in the Ehrenletzberger House, which included making room for, among many other things, Peter’s bookkeeping that I am still required by law to keep for three more years. The cellar was the most obvious choice for that, but since we had never cleaned it out or sorted it in any way since we moved into this building in 1991, but just kept stuffing more things into it, the cellar was a seriously daunting challenge. So on top of forcing my sons to say good-bye to their father again, I also had to force them to re-visit and work through their entire childhood, in order to decide what to discard and what to reorganize, which felt heartlessly unfair. Although Paddy did all the preliminary sorting, every time Christopher came back from Vienna, he found himself confronted with his childhood and having to make impossible decisions: Keep the beloved basketball books or not? What do we do with all the old Magic cards we spent a fortune on years ago? And boxes and boxes of notebooks …

When the cellar proved to be more than Paddy could cope with any longer by himself, Peter’s sister Moni came to the rescue – and what a rescue it was. When I came home from an exhausting weekend of clearing out the Workshop and found that she had not only neatly stacked all the leftover boxes in the living room, she had actually cleaned the entire flat as well, tears welled up in my eyes. Finding something I can do to surprise Moni and make her happy in return, has now become one of my primary goals.

On the side, however, when we had all had more than enough one Sunday, we decided to take a break, so Christopher, Paddy and I got in the car and drove out to the Megaplex at the edge of Linz to see the new Star Wars film, which we all thoroughly enjoyed (and Paddy and I later enjoyed watching all the old Star Wars films together after Christmas). On the way there, as the boys were remembering when we all went to see the marathon screening of the whole Lord of the Rings trilogy with Peter, I remembered the conversations Peter and I had then about how irresponsible it would be to take the boys to watch films until 3am, when they had school the next day. We agreed that it should be ok to be irresponsible parents sometimes, thinking the boys would be more likely to remember a special occasion like that than just another sensible day at school. It seems we were right.

Although I don’t want to seem ungrateful for all the wonderful help and support I have received, I have been dealing with boxes and boxes of things now since September, and I am thoroughly sick of boxes. Boxes in and out of the cellar, boxes back and forth through the flat, boxes out the door to the collection point, boxes in through the door with yet more stuff to be sorted, boxes in and out of shelves … Paddy did a heroic job of sorting and fixing things while I was in Michigan, and I was pleased and touched and sometimes even quite excited by his interest in my books that he came across in the process, but then Christopher arrived with yet more boxes – boxes of Paddy’s things that had been left at Christopher’s house when Paddy left Vienna last year. And when Paddy and I started trying to sort through those boxes, things started emerging that had already happily left this house before: Peter’s things that Paddy was keen to take into his own home four years ago, but at this point Paddy no longer has a home. Again and again, this feeling of déjà vu: I already did all of this four years ago; why do I have to do it again now? And again and again, all the symbolic reminders of all that Paddy is leaving behind. What talismans will keep him safe now?

Then Paddy left again the last weekend in February. Driving this time, not walking, taking not only his guitar, but also a laptop with him this time, but still no phone. He is now the same age that his father was, when Peter and I married, and as was true of Peter when I first met him, there is no guessing where Paddy may end up or when I might hear from him again. Saying good-bye was so hard and I miss him, but it was always clear that Paddy would not, could not be part of my Purple Normal. He has to find his own. He will find his own.

Between moving my office, cleaning out and closing the Workshop, reorganizing my entire flat, Michigan, saying good-bye to Paddy … this state of permanent upheaval has gone on far too long now. I need to find a satisfactory routine, a rhythm of living that sensibly accommodates working and – and whatever else there might be in life apart from working (just wandering back and forth wondering what I’m doing doesn’t count). 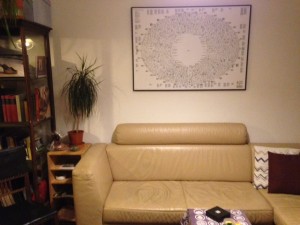 This is purple (thanks to Paddy)