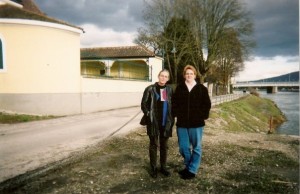 There is a word for it. There is actually a “technical” term that I have come across on the various websites about grief and mourning and bereavement that I read. It is a recognized psychological phenomenon, this unexpected and sudden feeling of disorientation, when something triggers a feeling of grief completely out of the blue, often long after you think you have learned to come to terms with loss. I can’t think of the word right now, though, because that is what I experienced this morning.

Even though I really ought to be at the alternative 1st May demo today, at some point I decided I just need a day off, and a public holiday in the middle of the week seemed like a good excuse. Feeling unusually unpressured when I got up, while I was making coffee I started absent-mindedly scrolling through Twitter, and a link that someone had posted caught my attention. It was a link to a beautiful series of photos of four sisters, taken every year from 1975 to 2010. Actually, I love to see sisters together, whether in pictures or in person. That always has a kind of bitter-sweet feeling to it, because it makes me miss my sister, but at the same time there is something tremendously comforting about seeing that other sisters can still be together. I love to see my mother-in-law with her sister: it invariably brings tears to my eyes as it reminds me that my sister and I will never be old women together, but at the same time it gives me great pleasure to watch the two of them turning into young girls again together, as they quickly fall into patterns of behavior from the course of their whole lifetime.

Perhaps it was the time frame of this photo series, perhaps it’s just this time of year or the fact that I have been thinking so much of Amy lately, but this morning it suddenly hit me, an inconsolable sense of loss and grief. Instead of doing any of the other things I had planned to do today at home, I found myself pouring over old pictures of Amy and me together. Sisters.

As it is the first day of May, I am reminded of that May four years ago, six months after Amy’s death, when it first really started sinking in that she really was dead, and I would never see her or hear from her or hug her again – a feeling I found most aptly expressed on yet another website: 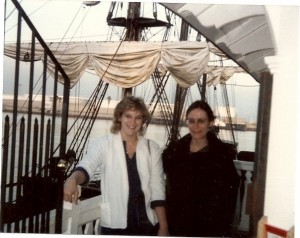 You think that their
dying is the worst
thing that could happen.

Then they stay dead.

I have also been thinking so much of her since I heard the good news that my godson and goddaughter-in-law are expecting a baby in early November, which means that around her 47th birthday this year, my sister would have become a grandmother. Since Amy is no longer here to welcome this first grandchild, I fully intend to do my best to stand in for her, which means I have a lot of work to do in order to be able to afford to go to Michigan by late October. I was with her when her son was born, and when Christopher was born she came to Austria, a determined young single mother on her own with a very small child and a very large suitcase. Then the two of us set out together with a two-year-old and a newborn to have fun doing tourist things, joining forces to pretend to ignore the appalled looks and disapproving comments from older women along the way. So no matter what it takes, I have to go to Michigan. 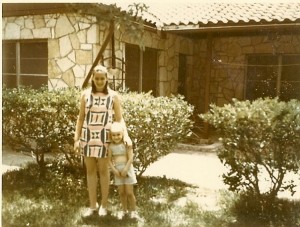 Sisters. Amy was my little sister. I loved her from the day she was born to the day she died, and I love her still in my heart. As ever, mourning for Amy allows the ghost of regret to escape that has haunted me since she died: I should have gone to stay with her when I realized what a hard time she was going through. Perhaps one of the hardest things about grieving is learning to accept that we cannot change the past, and it has taken me tremendous effort to learn to keep that particular ghost at bay. Of course it returned this morning, but it feels encouraging that this ghost no longer has the power to hurt me as it once did. I didn’t go to Michigan then – for so many different reasons – but blaming myself for not being able to help her would be disrespectful to Amy. That’s not what I promised her when I stood there stroking the arm of her lifeless body in the funeral home.

We cannot change the past, but neither can it be taken from us. I had a sister, and that was good. There will never be another picture taken of the two of us together, but I can still enjoy looking at pictures of other sisters together and being reminded of my sister and our past together. 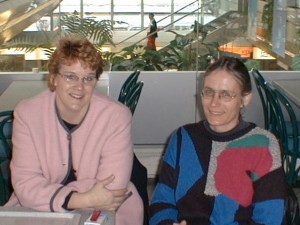