Six months. Tomorrow, Sunday, 13 May, it will be exactly six months since that Sunday in November, when a policeman arrived in the evening to tell me that Peter died when a mountain let him fall that day. Six months since the life I had shared with Peter for twenty-five years came to a sudden, dizzying halt.

In the past few months I have been working more, my own work, my job, the professional work I do to earn my own living. At some point, I realized that I was starting to use my work as a kind of escape from my actual current reality. So many times I found myself concentrating on the words in front of me, immersing myself in the texts and ideas, just as I have done for so many years. Then somewhere in the back of my mind there was a sense that – when I finish this text, I can go out to meet Peter for a drink late in the evening, if I finish this chapter tonight, he’ll come home tomorrow, if I work long hours this week, next Tuesday I can go to the airport with Jörg to pick him up. But no matter how many words I translate, they won’t bring Peter back. He’s not coming home. Ever. 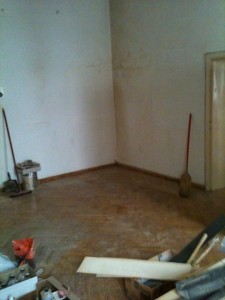 Empty corner in the workshop

Escaping into work, which is not entirely an escape, because I do, in fact, need to earn my own living, I have become less diligent about keeping up with my “widow’s tasks”. Thanks to the generous help from so many people, the workshop is nearly empty now, many domains have been transferred to other servers, and most of the paperwork that I could do so far has been taken care of. Next Tuesday the boys and I are meeting again with the court-appointed official, so that we can hopefully close the estate at last. Then I will take my list of downpayment amounts and bank details straight to our bank to arrange the money transfers to the people who have been waiting so long. After that I can start working my way through the stack of papers requiring the official authorization that I will hopefully receive on Tuesday. At the moment, I have the feeling there are still many, many things I need to do myself, before I can ask anyone else for more help, but for that reason, I have essentially stopped taking on any more translations this month, because I aim to close my widow’s tasks as far as possible by the end of this month. Then after Joseph and Emma’s wedding in June, I hope to be able to make a fresh start – at least to some extent – when I return.

Six months feels like an eternity, but also like only a brief, fleeting moment at the same time. A long time and a very short time all at once. While tomorrow marks the first half-year since Peter’s death, yesterday was the fourteenth anniversary of my father’s death. Fourteen years is a much longer period of time, yet every portion of my experience of my father’s death seems indelibly etched in my mind with such vivid clarity, as though it were only just a moment ago.

Thinking about my father this morning, I was moved to retrieve the folder from the top shelf with the stack of photocopied handwritten pages of the memories he started writing down for us. After his death, I had brought those pages home with me with the intention of transcribing them and making a kind of book for everyone, especially for all of my father’s grandchildren. Over and over, however, I found myself stymied by my father’s idiosyncratic orthography and his peculiar, uniquely personal grammatical constructions: my professional self was unable to literally transcribe his writing, while my grieving-daughter-self was overwhelmed by the vividness of the memories evoked by his very characteristic and achingly familiar writing. Even now, I can still hear his voice when I try to read those pages, but this morning I purposely paged through the different sections to re-read what my father had written about his memories of the death of his brother Burke. 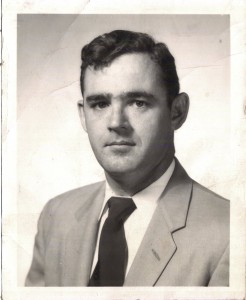 My father was 22, hardly older than Christopher is now, when he received word that his elder brother Burke was in a hospital in San Diego. My father was a sergeant in the Marine Corps at that time, stationed at Camp Pendleton in California, so he used up all his leave visiting Burke, sitting with him in the hospital, playing chess and talking. Although Burke was only two years older than my father and my father’s twin brother, four years older than their youngest brother Pat, he had been the “man of the house” since their father’s departure when he was nine, essentially the only father-figure the brothers really had. Burke had been born with a congenital heart defect, and although surgery was being developed at that time to correct the defect, when Burke underwent surgery at a medical center in San Francisco, it was only the third or fourth time the procedure had been performed there, and it was not successful. He was taken back to his mother’s home in Texas to die. At Easter in 1953, my father was able to take leave again to go and spend time with Burke in San Antonio, and they resumed their chess and checker games. “On Monday, April 6th, the day after Easter, he died. He was laying there in a semi prone position and we were talking for awhile. He said he was a little tired, closed his eyes and quietly died.” 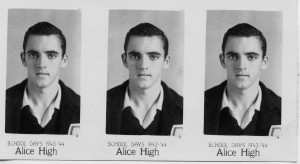 My father never stopped missing Burke. The experience of accompanying his dying brother, however, became a part of the man my father was, a part of his character in the way he could be patient, gentle, accepting, caring. There are indications that Burke and my father probably spoke at great length of all the trouble Burke had managed to get himself into in his short life, his need to guard his younger brothers from a life of sin and vice and make his peace with God as a good Catholic that he had been raised to be. Perhaps that has something to do with how tolerant and non-judgmental my father could be, his understanding that human beings make mistakes in life and need a chance to put things right. If that is so, then one of the things I valued most about my father, what I miss most even now, fourteen years after his death, stems from his loss of his beloved brother.