Although the involvement of our entire household last year became a bit intense in the end, Peter and I had worked for Crossing Europe in the background from the very beginning of the festival, and it was something we did together, something that felt important, something that always worked best together. This year both of our names are still in the catalogue, but working on my part alone, I felt incomplete. 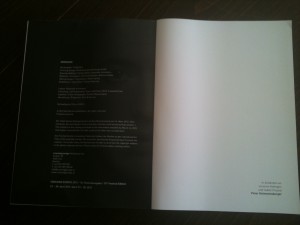 And during the festival, somehow in the back of my mind I always seemed to be waiting for Peter to show up in the midst of the crowd, always watching for him out of the corner of my eye. Having succumbed to a bad cold the weekend before the festival, which I hadn’t quite recovered from by the opening, didn’t make it any easier to cope, but I still felt strongly motivated to want to continue what Peter and I had started together and to continue it well.

While Peter’s contribution to the festival was network administration in the background, I think it wasn’t just his skill and experience as a network administrator that mattered. What made Peter such a good network administrator was he didn’t look at it primarily as a technical issue: one of the things I always loved best about Peter was the way he cared about people, and he built and managed networks for people he cared about, people he respected, people who need those networks in order to do their own work well. With all his skill and passion and attention to detail, Peter built musical instruments for musicians to play the music he loved; with different skills, but the same passion and attention to detail, he built and maintained network infrastructures for people to use for creating something else. For him, the work he did for Crossing Europe also meant dropping by the office, paying attention to the atmosphere, noticing what might be irritating or distracting for the different members of the team, when they needed to focus on preparing and running the festival. Alongside his incorrigible penchant for trying to keep an eye on everyone’s love-life, Peter was very perceptive of moods, tensions, excitement, and more concerned about the whole team being able to enjoy their work for the festival than about the actual films and subject matter of the festival. He didn’t really care much about the guests either, no matter how important they might be, unless he suspected them of giving any of the staff a hard time. 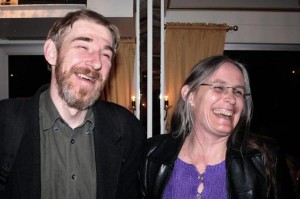 Together at Crossing Europe 2006

Working alone at the computer translating the festival catalogue, then the press releases and daily newsletters, I often felt cut off from everyone else, in a way, because I was missing Peter coming in and telling me about what was going on in the office, the general mood and what any individuals might be needing at any given moment. Although Peter and I often disagreed about many things, we were perfectly united in our admiration for the festival director Christine Dollhofer, so the first rule was always: whatever Christine needs, Christine gets. In order to be able to run such a wonderful festival at all, the first thing that Christine needs is an excellent team, where everyone can take care of their specific responsibilities to the best of their abilities. Somewhere behind that team, Peter and I were there to make sure that they had the infrastructure and resources needed to do their jobs with all the support we were able to offer together. What I can offer by myself – without Peter’s generous personality and warm-hearted presence – feels very little now.

The whole Crossing Europe team has been so generous and thoughtful since Peter’s death, inviting me for drinks, taking time to talk, encouraging me, so I wanted to return something of that too. Knowing how hard everyone works in all the service areas, the people who look after the festival guests, I thought I would like to invite a few of those hard-working people for a nice breakfast on my balcony at the start of the festival, but getting sick just before the festival put an end even to that small gesture. I think I’ll have to keep looking for other contributions I might be able to make by myself.

Although I ended up generally feeling very low and slow all week, it was a great delight to have both Christopher and Patrick here for the festival. It was most uplifting to be able to share serious and silly conversations with them, including random outbursts of song when they launched into their ridiculous rendition of “Rainbows and Lollipops” in the middle the restaurant garden, feeling less lonely in their company. Since they have grown up with the festival, they have also grown up with our household rule about Christine, and I am happy to see they take that seriously. Since Paddy didn’t have a film in the program this year, Christine had suggested he could apply for accreditation as a film student, because he really is, even though he is officially enrolled as a student of computer science. I was pleased to hear that Paddy had reservations about that, because he wouldn’t want to take unfair advantage of his parents’ connections, but I was also pleased that he had a festival pass in the end and made good use of it. At the Awards Ceremony Christopher and Leo performed two numbers from their new project together, Broken Sequence, which worked out quite well, and it was reassuring to see Christopher taking over different responsibilities. In the future, Crossing Europe will continue without Peter, but our sons will still be here to take over whatever they might be needed for, and that, at least, is a hopeful thought. 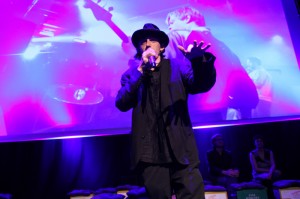