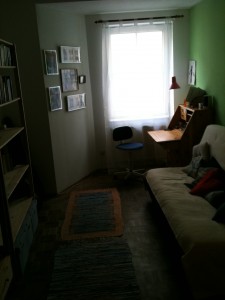 By chance, on the day that Paddy was to drive our car to Vienna to move his things into his new flat in Vienna, we were woken very early by the postman, who delivered a very large box addressed to Christopher. The large box turned out to contain several smaller boxes, each surrounded by packing material, at the core of which was a tea pot with matching sugar bowl and milk pitcher that had belonged to Grandma. When Grandma died and we were all asked what we would like to have that had belonged to her, Christopher requested the tea pot that Grandpa had bought for Grandma in Ireland, but we had meanwhile all forgotten about it.

Paddy was happy to claim the boxes for packing, but at that point it also became clear that Paddy, our tea connoisseur, had no tea pot of his own. While Paddy was packing, I went to the office to work, but I was restless and distracted all day, so at some point in the afternoon, I gave up. I went across the street to Paddy’s favorite tea shop in Linz, where the lovely young owner helped me to pick out a tea pot for him, which she packed up together with his favorite tea and her good wishes, and I got home with it just in time to help carry boxes and bags downstairs to be squeezed into the car. In the end, there was no way to get everything into the car, so when Paddy set off for Vienna, Christopher and I carried the remaining boxes and bags upstairs again.

The room that had been the boys’ room for so many years remained in this state of arrested chaos until Peter borrowed a VW bus from a friend the following week, and Paddy was able to move the rest of his belongings to Vienna.

Leaving me with an empty room and a mind full of memories. 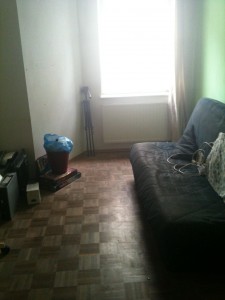 Although I was starting to imagine what this room would eventually look like and what I would like to do with it, it was hard to know where to begin. Although Paddy had painted two walls a lovely shade of green after Christopher moved out, after he took his desks, shelves and posters to Vienna, the dire state of the other two walls became glaringly obvious. They really needed painting, but the prospect of undertaking that task by myself did not appeal to me in any way. Then two young friends came to my rescue and happily agreed to paint the wall for me. It seemed a bit absurd to ask two talented graffiti artists to paint a wall white and just leave it, but as artists they know their material and did an excellent job. I enjoyed listening to them imagining what they could do with a white wall, but in the end they helped me assemble book shelves and put them in front of the wall, instead of fantastical painting on it. When Peter came home and found his favorite crime mystery novels neatly arranged together on the new shelves, he was so pleased that, to my surprise, I have not heard a single complaint about things being moved.

Between the paint, the shelves and a few other odds and ends, I quickly ran out of money for any further new furnishings, so the old black couch with a white cover on it will have to do for now, as will Paddy’s old primary school desk that I dragged up from the cellar some time ago. So the room is not exactly as I imagined it, but it is good enough for a start: as a guest room, as a writing room for me.

In a way, it is ironic that the room as returned to me now – or I to the room. When we first moved into this flat, when Christopher was just over a year old, seven months before Paddy was born, this room was designated as my room: for sewing, writing, keeping things safe from small people. Christopher’s – and then also Paddy’s – room was the one in the back with the window to the balcony. After the first winter, however, it became obvious that our building was badly constructed and poorly insulated, as the dampness in the children’s room was so bad that the floor started warping and mold was appearing on the wall. I hadn’t really fully taken possession of my so-called workroom yet, so switching the rooms didn’t seem to matter much. Soon after that, as Peter and I both became more and more interested in the Internet and Linux and trying out running a small network, “my” workroom became the computer room, which it still remains.

Since the computers at our house require an entire room for themselves, Christopher and Paddy always shared this front room, even though it is not even big enough for two beds, which is why they always had bunk beds and everyone spent more time in the large, bright living room. In short, trying to occupy space for myself in this household has been an ongoing challenge for the past twenty years. As Virginia Woolf stated, a woman needs money and room of her own to write. I’m not sure about the money, but now I’ve got a room of my own for writing. 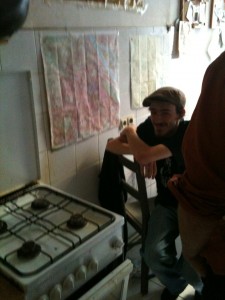 In the meantime, Grandma’s tea pot, a delightfully kitschy set of white china sprinkled with green shamrocks with a gold-painted tiny pagoda-shaped knob on top, which traveled from Ireland to Albuquerque to Texas and back to Albuquerque and from there to Linz, has arrived safely in Vienna, where it now lives happily in the kitchen of Christopher’s shared flat in the sixth district, surrounded by political slogans, coffee cups in need of washing, and overflowing ashtrays. Paddy now lives happily in a large bright room in a newly renovated flat in an old building in a colorful neighborhood, which he shares with a childhood friend, although they are still in search of a third flat-mate. 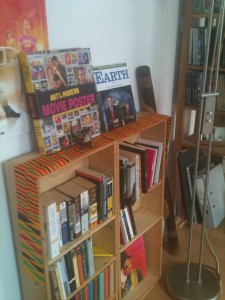 When I went to visit them, I enjoyed having my grown-up sons show me around the city and explain to me how it works. They have both decided to study in Vienna now, so Paddy has registered as a student of musicology and computer science, while Christopher has registered to study English (“British and American Studies”), although they both intend to pursue their other interests in film and music at the same time. 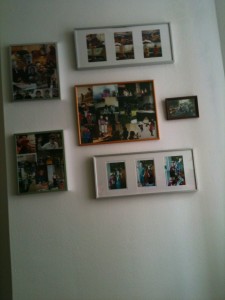 After spending quite a bit of time going through old photos, I finally managed to narrow my selection of favorites down to a number small enough to put into frames and hang on the wall. With my memories of the boys’ childhood and teen years now externalized and fixed on the wall, I have cleared mental space as well as physical space to focus on … what? At this point, I have the feeling I have either forgotten how to write, or else I simply have nothing to say for myself. But at least now I have time and space to figure it out.